For better or worse I spend a disproportionate amount of my time in and around Canary Wharf.

It’s where I work (for my sins) so naturally I have to spend quite a chunk of my day there because, well, those bills aren’t going to pay themselves.

Why then, you might understandably ask, would I want to spend any more of my waking hours there than absolutely necessary? And you’d have a fair point. Canary Wharf is one of the most sanitised and corporate areas of London. It’s all business, money, suits and seriously overpriced sandwiches. 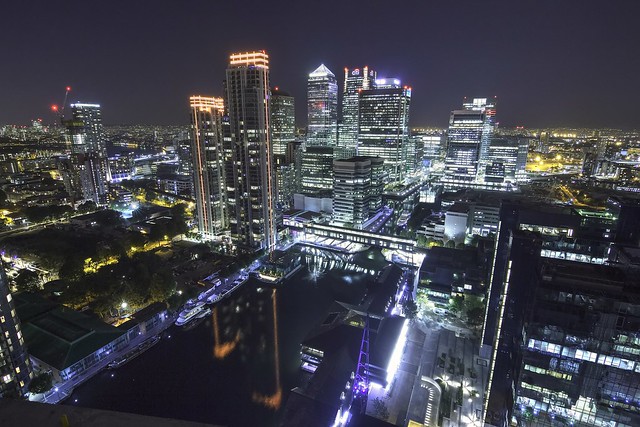 If you can afford to actually live within Canary Wharf itself then you probably have more money than sense. The average price on the new high rise luxury apartments that are springing up all over the place on the island run into the millions and if you work out the pound-per-square foot cost on some of these postage stamp properties it makes you want to vomit. 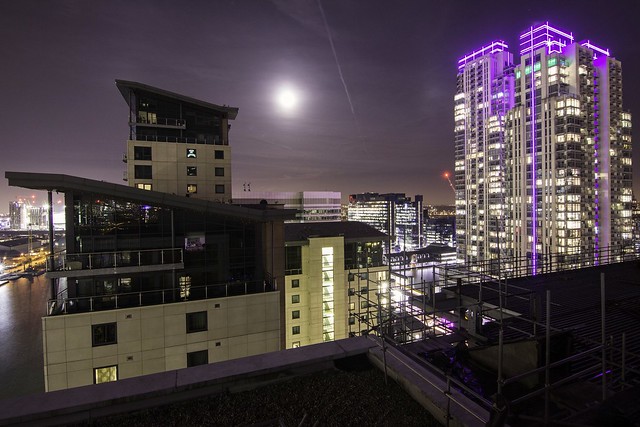 But hey, that couple of million quid gets you an exclusive high rise view right? Well, no not really, I’ll take those views for free thanks very much. 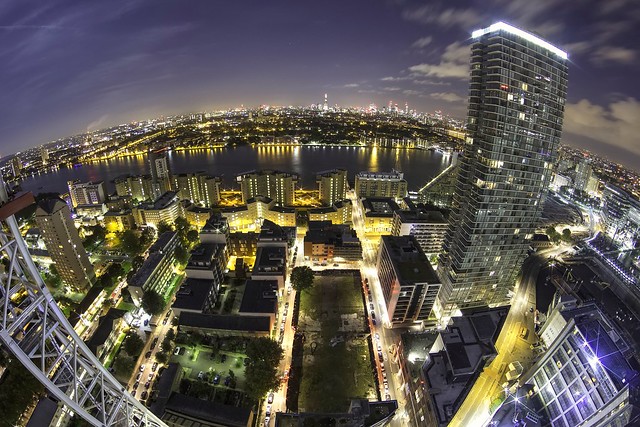 See, what Canary Wharf does have going for it is an abundance of new places to explore with high rise towers, cranes and rooftops pretty much any direction you look. So look we did. On and off over the course of the year we managed to see the Wharf and the surrounding peninsula from most of these new vantage points, taking in the views from as many new high spots we could. 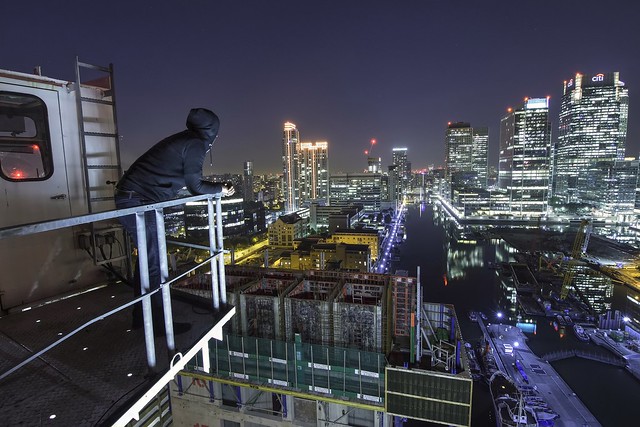 One of our first was the 400+ foot Providence Tower. It looked like it had topped out so after alot of over-thinking and unnecessary caution we eventually made it inside and started to tackle the 40 story climb. By the mid 30’s the stairwell had ceased and it went into a pitch black construction zone with standard ladders and hatches up to the top. We found the roof hadn’t even been laid yet so getting a decent view over all the hoarding was a challenge. Eventually we dove back down a couple of levels where the views were much less restricted. Consequently it was also extremely windy so most of my pictures were shite. I had just started shooting film at the time so also rattled off a few shots on my 35mm not really expecting much, evidently they turned out better than any of my digital shots. Poundland Agfa Vista for a pound a go? Winner. 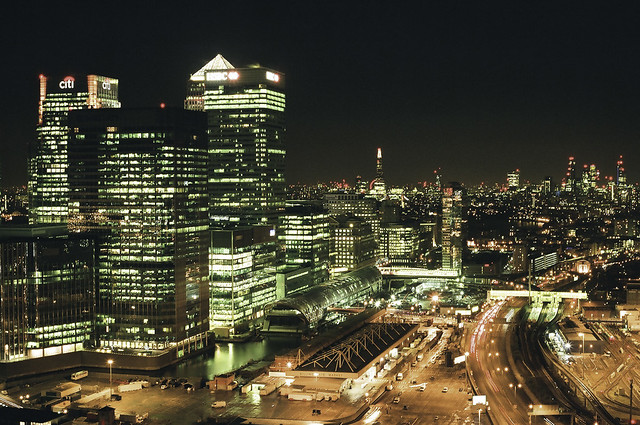 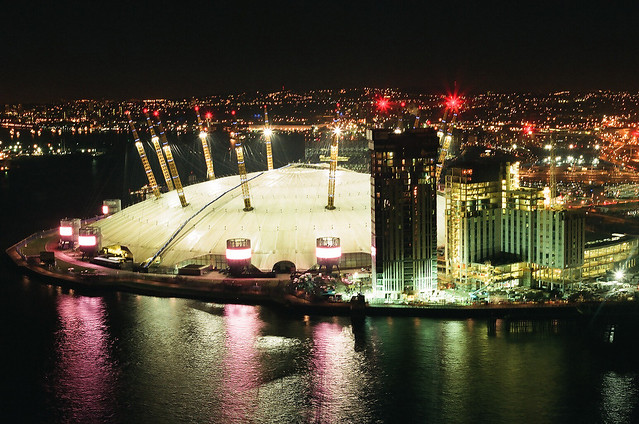 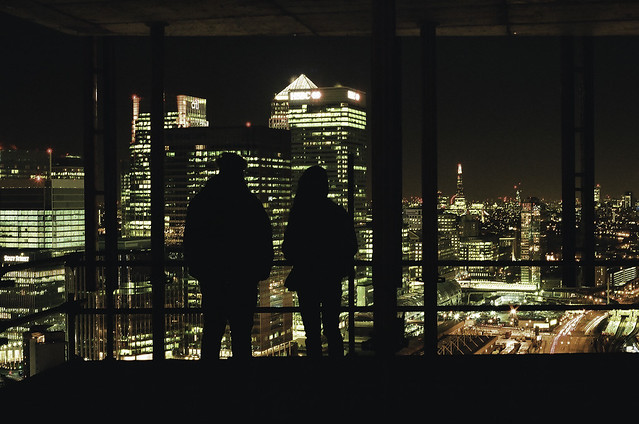 Despite the views being pretty similar from anywhere on the wharf it’s definitely quite something to behold however you look at it, especially at night. Like most corporate areas of London it’s a comparatively banal place by day but by night it actually becomes quite impressive with everything lit up in dazzling neon. Consequently it’s quite photogenic (although the sign on the JP Morgan building can go fuck itself for blowing out the highlights on EVERY picture it’s in) plus there’s also the added challenge and excitement of it allegedly being one of the most heavily securitised and CCTV covered areas of London. 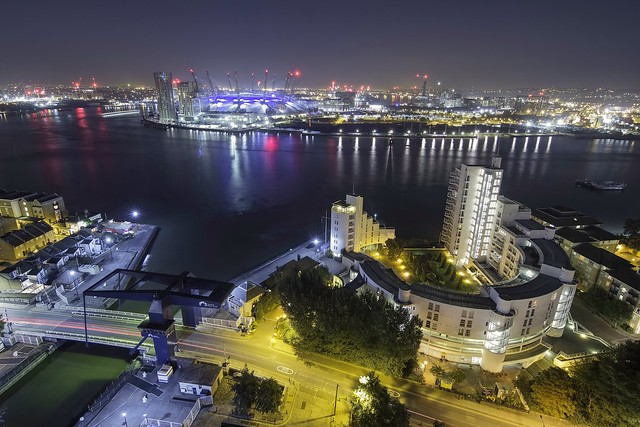 When it comes down to it there’s just nothing quite like sneaking your way into one of these places and soaking up the views gratis from what will one day be a multi-million pound penthouse suite I’ll never be able to afford. They say money never sleeps but I guess sometimes security have to.

On the flipside there’s also a few industrial throwbacks dotted around the Wharf in the shape of the old dock cranes they’ve maintained around some of the dock areas. These rugged iron and steel constructions are a nice contrast to the modern,  clean-cut glass and chrome that seems to dominate the rest of the area. They made for a fun distraction one night and it felt good to get up close and personal with a little piece of old London industry.

Almost as much fun was watching the two rather pissed-up Russian lads who greeted as at the bottom (they’d somehow seen us coming down and decided they wanted a go) climb up then scale the jib. We watched nervously from the ground before leaving them to their fun. 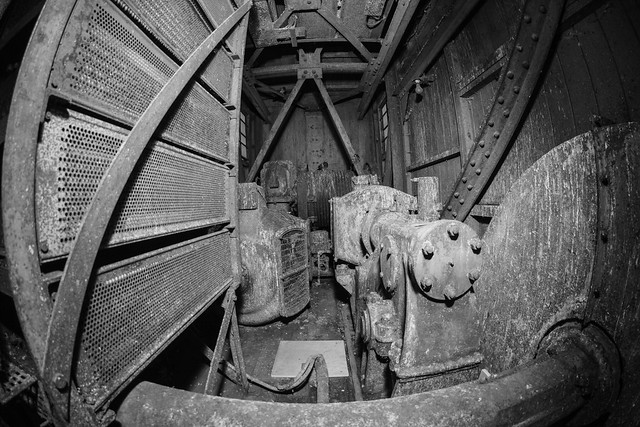 To think that this mini metropolis, the so-called financial heart of London, was effectively just a giant patch of wasteland and marshes little more than a generation ago really blows your mind. The added fact that until the Shard came along it was also the home of the highest completed building in the UK (and one of the highest in Europe) just makes it all the more astounding just how quickly this place has developed.

To emphasise just how quickly development on Canary Wharf is still going ahead you could see the sites for the next big luxury high rises being prepared from the top of the ones that hadn’t even been completed yet. I guess those overseas property investors,  fat cat CEO’s and oil oligarchs really must need something else to spend their squillions on. A fine example of capitalism at it’s best/worst depending on which side of the proverbial coin you’re on I suppose.

Anyhow, the big city cluster of central London tends to be the bigger draw for explorers and I can understand why with it’s distinctive skyline but, for better or worse, Canary Wharf is as much a part of London’s fabric and can’t be ignored. The last few months have been alot of fun exploring the various high spots the Wharf has to offer and for now it’s time to set my sights on other things however with the raft of new developments swiftly moving forward over the coming years I’m sure myself and others will be back for more.

Granted, It might be the epicentre of financial arseholery in the UK but it does still have it’s merits.

One thought on “No Money, No Problems – Getting High In Canary Wharf”